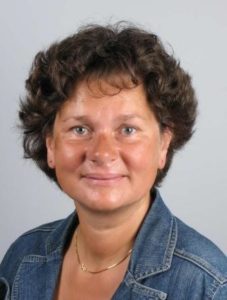 Corien Eeltink (1961) is a Clinical Nurse Specialist in the Department of Haematology of VU University Medical Center in Amsterdam. Within the outclinic patientcare she has two areas, namely changes in sexuality in cancer and care for the elderly patient with a hematologic disease.

In 2006, she wrote a book for nurses on cancer and sexuality, and in 2007 she set up her first research project in the field of cancer and sexuality. In the same year she won the award for the best nurses’s abstract at the 24th meeting of the European Group for Bone Marrow Transplantation Nurses Group, with her abstract entitled ‘Sexual dysfunctions during and after chemotherapy for haematological malignancy. Do patients want to know?’ She also received the European Oncology Nursing Society Excellence in Patient Education Award in 2009, for her booklet entitled: ‘A question and answer approach about cancer and sexuality’.

In 2016 she received the 8th Distinguished Merit Award by the European Bone Marrow Transplantation Nurses Group.